So-called Right to Work laws pose a serious threat to worker rights and should be strongly protested by anyone who believes in the dignity of workers and working families.  Portrayed as something that is supposed to give workers free choice, these laws are really just disguised attacks on union resources.  By allowing indiivduals to reap the benefits of union-negotiated contracts without paying dues, they limit organized labor's ability to help all working families. 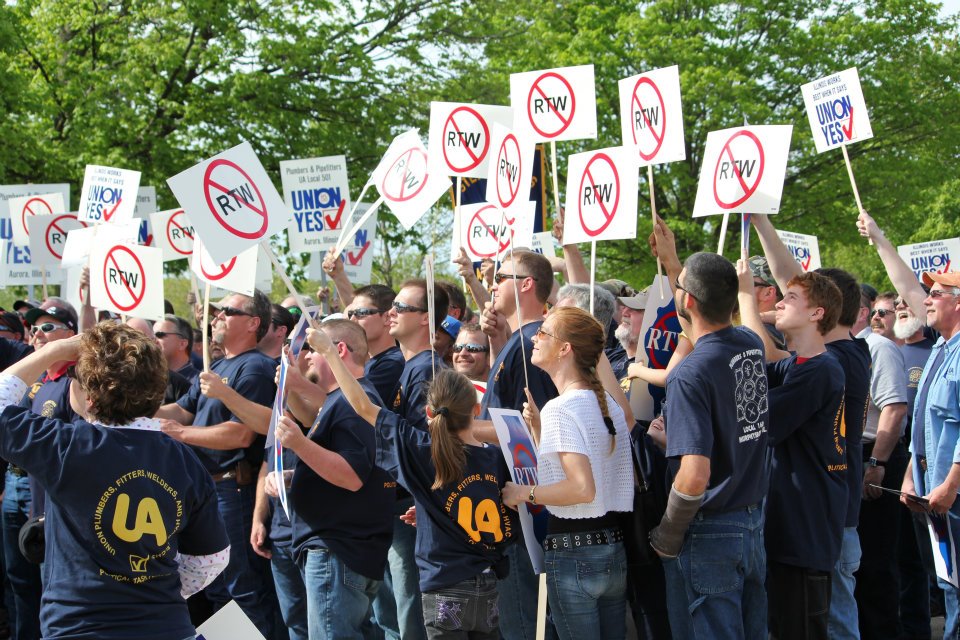 Labor unions lift wages for non-union members by creating a higher prevailing wage.  For example, a non-union construction worker’s wage is closely tied to what his or her union counter-part has bargained for.  When the wages of union construction workers fall after “Right to Work for Less” legislation is passed, you can bet that wages fall for the non-union sector as well.  And there are too many middle class Americans in a wide range of occupations that can’t afford to give up any more.

Unions raise wages for all workers, as well as demand for health and retirement benefits, workplace rights, and stronger health and safety protections.  The gains of labor unions over the years have raised standards for all workers and have protected millions of Americans who use the products and services that American workers build, provide and maintain.

The truth is that the labor movement has helped millions of union and non-union middle class workers earn enough to raise a family, purchase a home, send their children to college, and retire with dignity.

In states with right to work laws, the average worker earns roughly $1,500 less a year and median income is almost $6,500 lower.  Workers in these states are also less likely to have insurance and more likely to be stuck in a low-wage occupation.  It gets worse, poverty rates for children in these states are 21% higher!  This is not what America wants or needs and workers everwhere should protest these attacks in every way we can.